Kawagoe Matsuri [ 川越まつり ] is 2-day festival that takes place the 3rd weekend of October and lasts the whole day. It's about an hour train ride northwest of Tokyo in Kawagoe Station, Saitama. Aside from the regular Japanese festival street food/game vendors, the main thing to see is the 2-storey floats-on-wheels called dashi [ 山車 ] pulled by ropes and manpower. On 29 or so different elaborately-decorated floats, locals dressed up in traditional costumes drum and dance Japanese style. 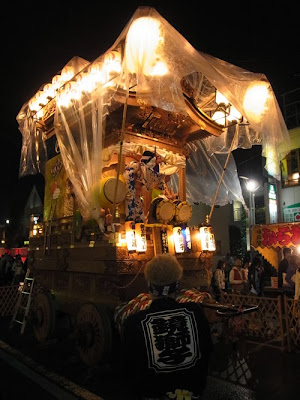 On Saturday, the festivities started at 2 in the afternoon, but we didn't get there until 6, where lanterns on the floats lit up and performances started despite the possibility of rain. At 7, the main event hikkawase [ 曳っかわせ ] began, which meant that locals started moving the floats. When one float met another float or a street-side stage, they turned to face one another to "battle" it out. 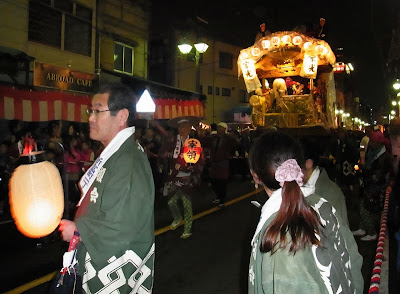 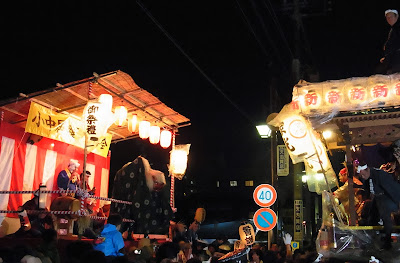 It was quite crowded even though it was chilly and about to rain, so we slowly shuffled along with the crowd until we found a float we liked then followed it to see it battle it out with the others. It was very interesting... definitely worth seeing. If you get hungry, there are loads of vendors selling food ranging from 100 yen to 1000 yen. There are also loads of shops and restaurants all along the festival routes. 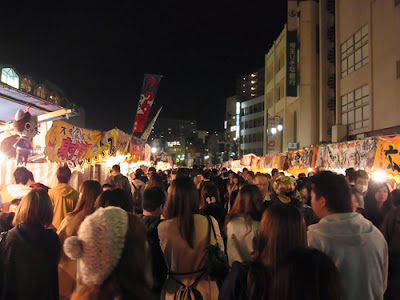 You can find more info on Kawagoe Festival Offical Website : English | Japanese with more details, including a map of where the floats are. Just click the 2nd menu button on the left, 交通規制, then scroll down to click on the brown button to get a map of where they all are. Or, you can do what we did, which is to wander around the station until you find a float to follow. The festival lasts until 9 in the evening.