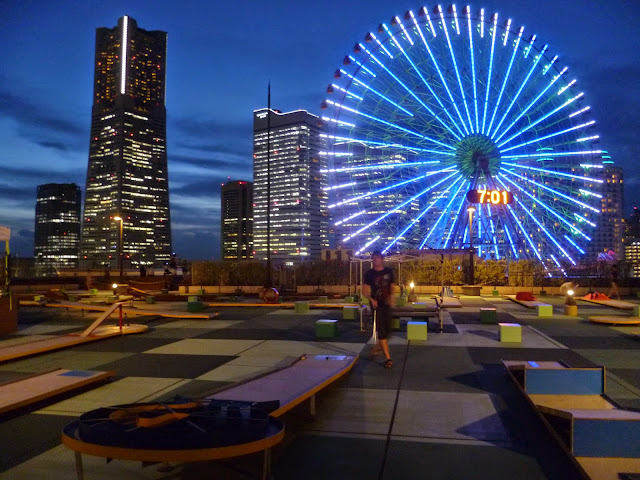 We have been looking around for a while for a place to play mini golf around Tokyo... it's often called "baby golf" in Japan. Finally, we found a place called Yokohama Bahn Golf [ 横浜バーンゴルフ場 ] ( website in Japanese ) on the rooftop of a mall called Yokohama World Porters [ 横浜ワールドポーターズ ] in Minato Mirai [ みなとみらい21 ], a short walk from JR's Sakuragichō Station [ 桜木町駅 ] - You'll be able to see the building from the station and there are maps around the station. It's basically next to the giant Ferris wheel. There are lots of things to do around there, including an amusement park (charged per ride so quite expensive - around 700 yen per ride).

So it's 500 yen to play 9 holes or 900 yen to play 18 holes - the last 9 were considerably more difficult to play but great fun nevertheless! In the summer, it opens from 10 am to 8 pm (but you have to enter before 7 pm). At first glance, it might not look very good, but it's actually quite an amusing way to spend an hour. You don't even have to bend down to pick up the ball because you can just use the handle of the club to suck up the ball! At night, you get the backdrop of the Ferris wheel and Landmark Tower all lit up in the backdrop. Great place for a date!

It's a bit different from mini golf courses in North America and the UK. Each one is on a slightly raised metal platform that you're not allowed to step on. For 2 of the courses, you have to use a special wooden ball. One course even involves swinging the ball in the air to make it land inside a net a meter away. Weird but cool!