So, this is a mid-April weekend trip starting from Karuizawa 軽井沢, to Komoro Kaikoen 小諸 懐古園 and Ueda Castle 上田城 for night cherry blossom light-up, then onward to Shiraito Falls 白糸の滝 then Kusatsu Onsen 草津温泉. Not sure why Japanese people always rave about Karuizawa... Although it is pretty pleasant and very close to Tokyo, it's really not overly exciting. There are a few cute little churches, but mostly Asian tourists come to take photos of these, as they are just... well, churches.

On the way back from Kusatsu, we walked the pleasant but not overly exciting Sasayaki no komichi ささやきの小径, a tree-lined path by a small river, and also stopped by Kyu-Karuizawa 旧軽井沢, which is just a street with shops similar to many other areas in Japan. I suppose the outlet mall right by Karuizawa Station (the food court there is nice) and the ski resort draw a lot of people here as well. 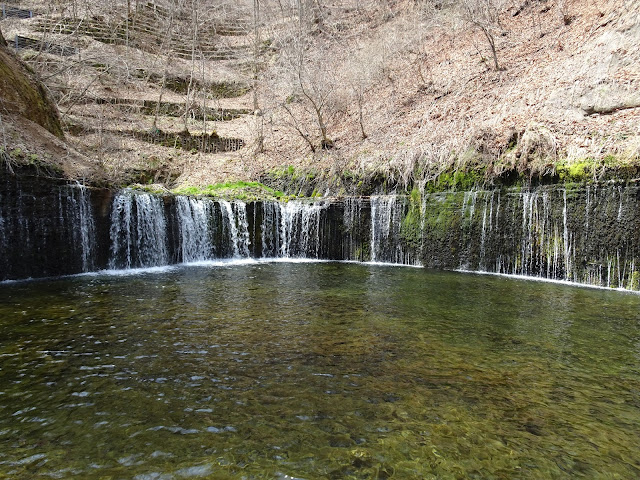 From Karuizawa, we went on to Shiraito Falls 白糸の滝. Saw big posters of Shiraito Falls 白糸の滝 at train stations around Tokyo, but not sure if it was actually worth it to make the trip here... It took a lot longer to get here than to see it. It's a 23-minute/710 yen windy bus ride from stop #2 to the right of Karuizawa Station's North Exit. Just a 5-minute walk to the fall - nice and beautiful enough but much smaller and less impressive than I imagined. It probably wouldn't take you more than 15 minutes to enjoy the falls. We came here in April so it might be better at some other time of the year.